Stock averages continue to hold their own as proceedings move through a normally slower season of vacations. While volume left a little something to be desired on the S&P 500’s latest move to a new high, turnover on the Nasdaq made up for that. 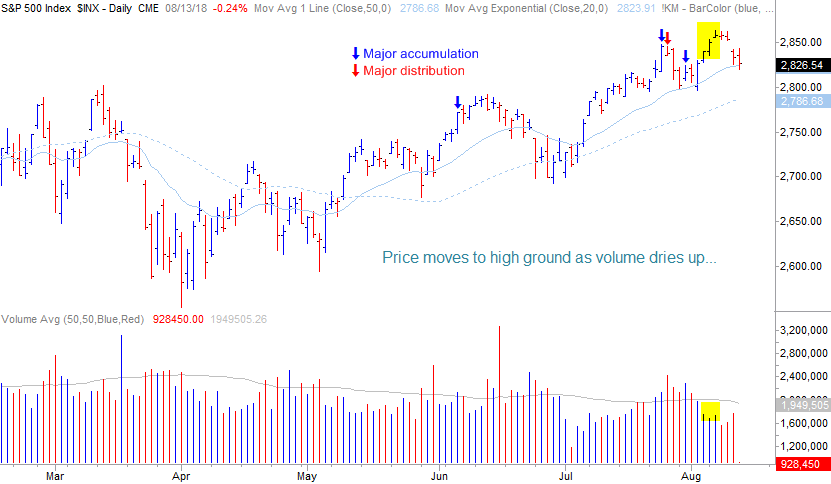 Given the Nasdaq’s v-shaped rebound from a few days of selloff in late July, bona fide five-week-plus bases in the growth sector are in short supply. This is simply a market that is a victim of its own success.

The average stock remains in good shape based on the daily NYSE advance-decline line. This measure of breadth, and others, are important to watch as the tendency is for the average stock to peak some months before a bull market top in the averages.

The good news is that the Naz has outperformed in eight of the last nine sessions since the July 30 low. This preference for the growth index is corroborated by the action of the leading growth glamours.

Spinouts in a couple of the liquid glamours, Facebook (FB) and Netflix (NFLX), did not spread to other institutional must-owns such as Amazon.com (AMZN) and Apple (AAPL). This is an illustration of the importance of viewing a cross-section of senior glamours, and not rushing to a conclusion based on one or two, however much of a bellwether they may seem.

Healthcare has emerged as the dominant leadership sector, along with technology. Healthcare wears two hats, as both a defensive segment and also a growth area. 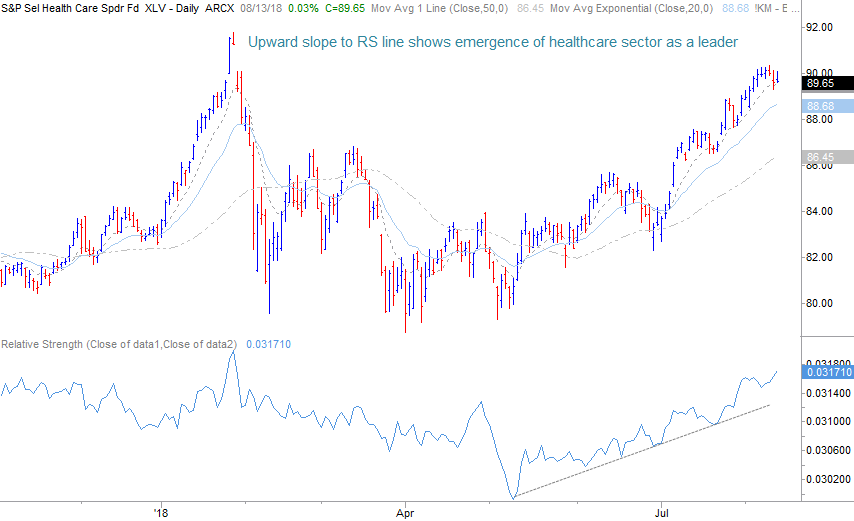 A cautionary sign would appear should leadership shift from growth to defensive. In particular, the consumer staples are being watched for this.

There are a couple of seasonal patterns that are worth paying attention to. One of them is for the market to sometimes go through September-October softness before the often-bullish November-January period. While paying attention to something like this at the exclusion of an analysis of the averages and leaders is never advisable, it is worth being aware of.

The following names are considered the best pattern setups priced at $13 and above for breakout players.

Chegg (CHGG) is forecast to put up earnings growth of 64%/28% in ‘18/’19. Revenue at the provider of textbooks and supplemental materials to college students grew 32% in the recent quarter. A 97 RS stock in a 90 RS group.

The stock sold off sharply around its earnings report two weeks ago, then rebounded on greater volume post-report. Last week, price tightened up as volume shrank, a bullish development. CHGG can be taken above the 29.84 high of its recent eight-week base on volume. A junior position (half normal, or less) should always be taken initially in order to mitigate the risk of being incorrect. An eventual add-on position can be taken should price act well. 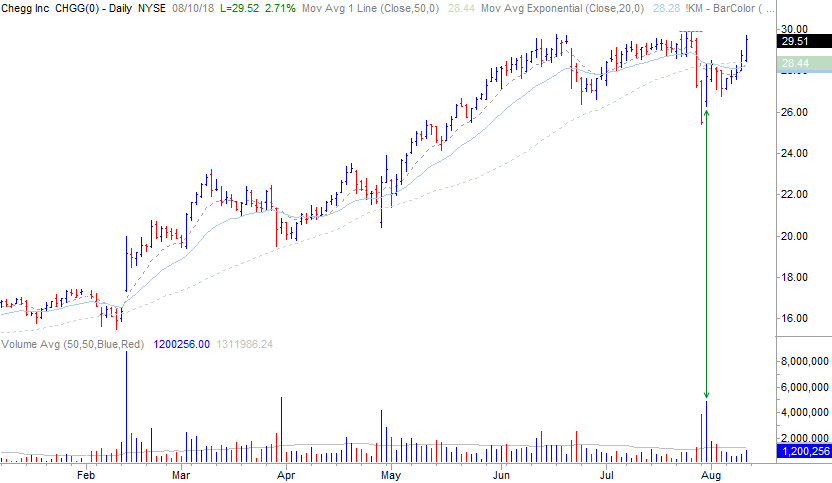 Docusign (DOCU) is an enterprise software maker that came public at 29 in April. Empirical evidence has shown that a recent new issue that is up 50% or more in the first two months of its existence has a greater potential to become a real leader.

In DOCU’s case, after eight days, it was up about 50%, and after eight weeks it was up 130% from its offering price. Earnings per share are expected to move from a 27-cent loss in the January ’18 year to 5 cents in ’19 and 18 cents in ’20. Sales grew a sturdy 37% in each of the past two quarters. Mutual funds jumped to 260 in their first real quarter, a high figure for a recent new issue.

Price forms a seven-week cup and is one day into a possible handle. The 62.15 high of 8/9, last Thursday, can be used as a cheater entrance ahead of any base breakout attempt.

In addition to its powerhouse, eight-week opening, its quick embrace by institutions, and its high liquidity ($105MM in ADDV), DOCU’s business is the steady-eddy type favored by large investors. Paypal (PYPL) is another of this ilk that comes to mind. Earnings are expected Sept. 6. 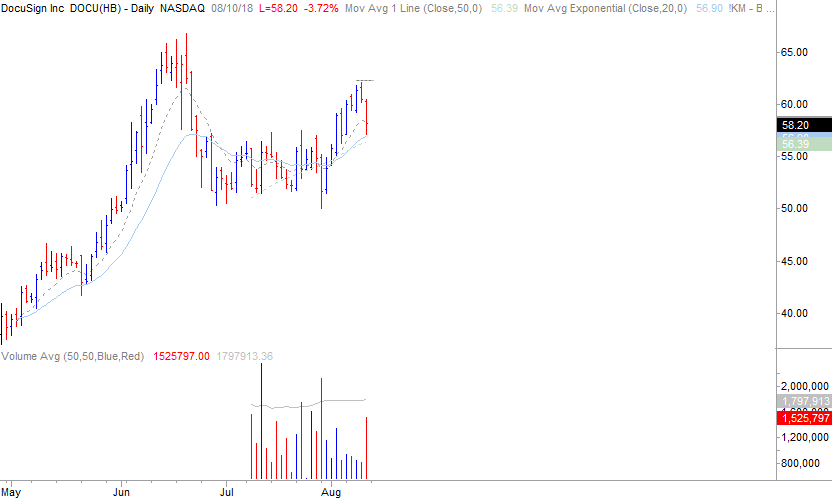 Price broke out of a six-week flat base last week on +438% volume, but reversed mid-session to close below the lip. It then pulled back for two days and rose 5.3% on +26% volume Friday. This was a day in which the Nasdaq lost 0.67%.

The retailer of handmade goods can be taken above Friday’s high of 46.61. 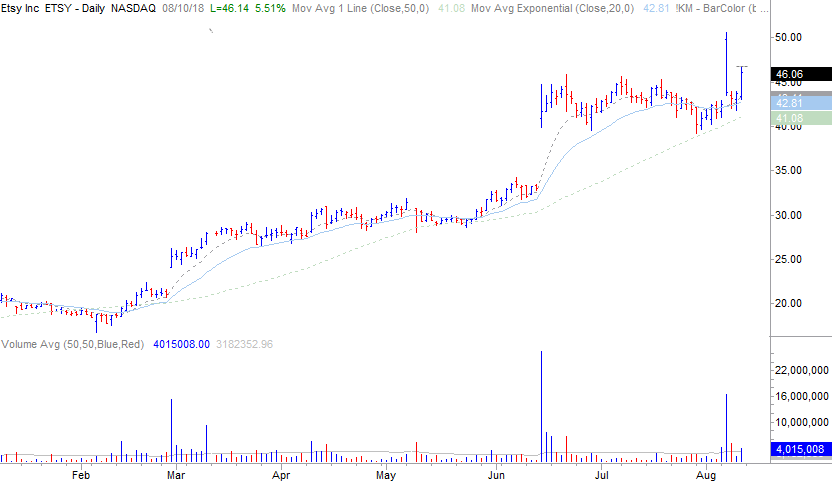 Everbridge (EVBG) is an enterprise software developer with losses forecast for ‘18/’19. Revenue growth has been 34%-43% for the past four quarters. A 96 RS stock in a 98 RS group.

Price forms an eight-week pattern and can be taken above the base top of 53.42. 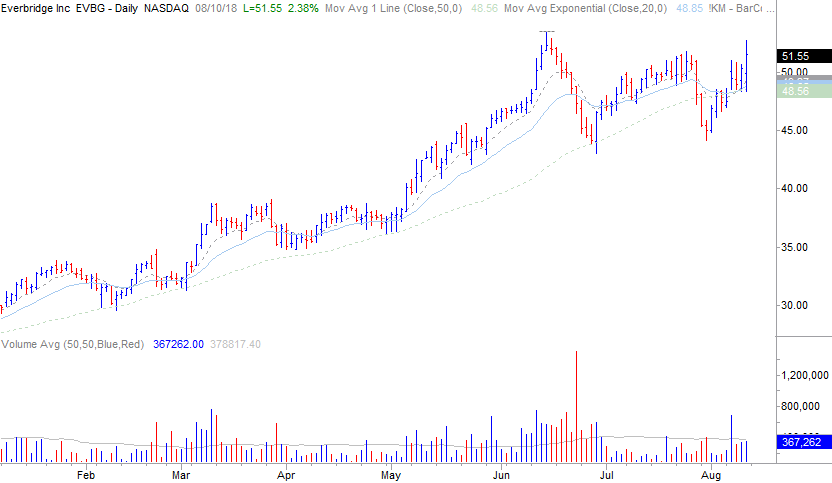 Goosehead Insurance (GSHD) is a recent new issue, coming public at 10 in April and nearly tripling in its first three months. It is a growth company in a non-growth industry. The Street expects earnings to grow 13% this year and 56% next year. Meanwhile, sales have expanded 36% in the most recent quarter. A 97 RS stock under solid accumulation.

After touching its 50-day line in reaction to its earnings report last week, price reversed as earnings estimates were revised higher. GSHD can be entered above its 7/19 high of 29.73. 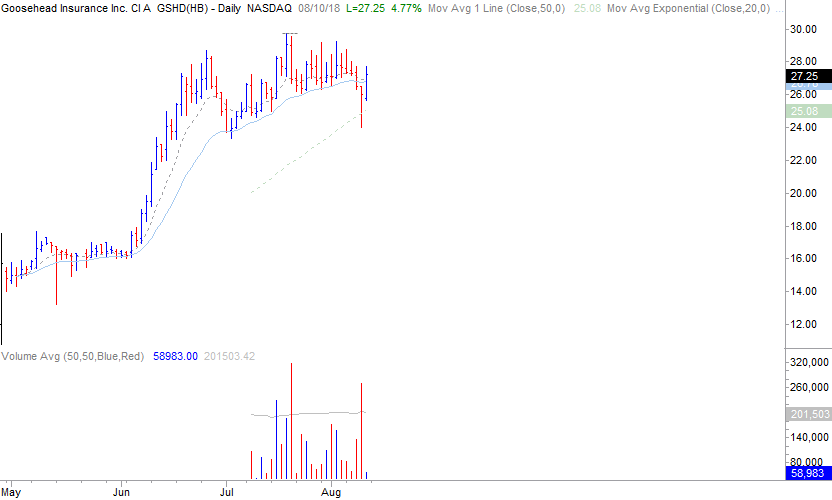 Mongodb (MDB) was discussed in the last report and crossed the suggested pivot point, but did so on mediocre volume and should not have been taken. The database expert and recent new issue is still of interest given its 1) near-doubling in price over just eight weeks during Q2, 2) its big revenue growth of 49%-50% in the last two quarters, and 3) its quick 7.6% snapback of 8/2 after touching the 50-day line two days in a row.

MDB has shown superb price persistency on its Q2 rally and its current move up. While Friday’s breakout of a two-week v-shaped pattern occurred on -17% volume and was unattractive, MDB can be monitored for a pullback of reasonable depth. Earnings are expected 9/5 post-close. 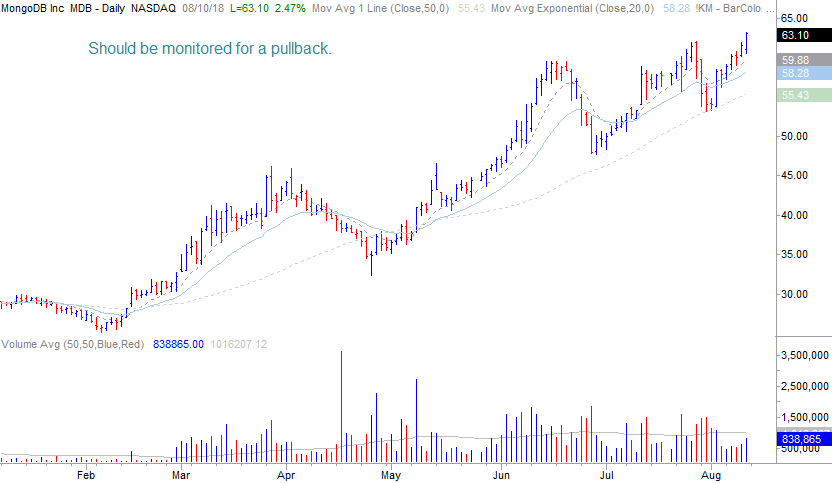 Pluralsight (PS) is a software developer that is expected to post losses for ‘18/’19. Revenue has grown 38% in the recent quarter. This is a recent new issue that came close to doubling in its opening four weeks. As noted, new issues with performance like this are worth paying attention to. The stock is under solid accumulation.

The software developer is eight weeks into a base. It can be monitored for a handle formation or other sideways drift or pullback closer to its high of 29.84. A more-aggressive entry would be on a breakout without insisting on any backing-and-filling action. 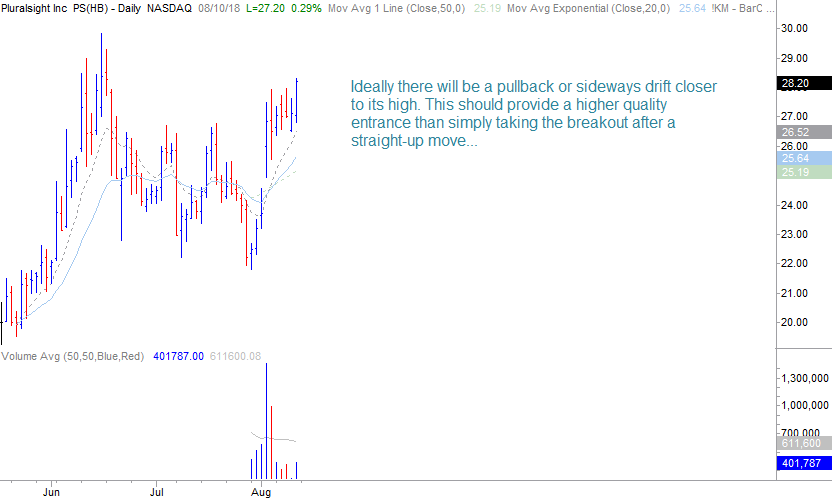 Sendgrid (SEND) is a recent new issue that doubled in its first four months. With earnings estimates of 87%/33% for ‘18/’19 and 32% revenue growth in the recent quarter, the Internet communications concern has solid fundamental support. It is under extreme accumulation, a 94 RS stock in a 97 RS group.

SEND can be entered on a break of its five-month consolidation above the 32.03 high of 8/10. 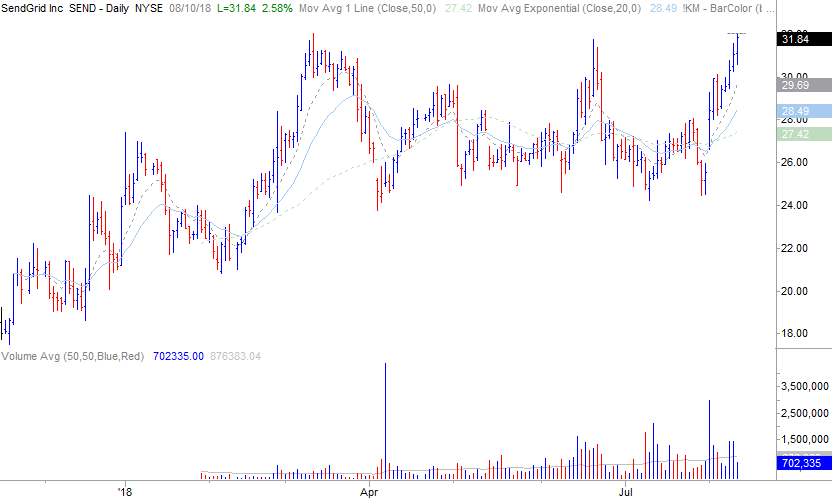 Square (SQ) is a favored name and boasts earnings estimates of 67%/73% for ‘18/’19 and 48% revenue growth in its recent quarter. In the last report, it was noted that SQ “can be taken on a big-volume move through the 69.40 base top.” The move occurred but volume was less than the 40%-50% increase that is preferred on a breakout day.

It is premature to take SQ on a breakout. It is being followed to see if it can put in another week of basing at a minimum, and possibly more, in order to build an area to serve as support for a breakout. 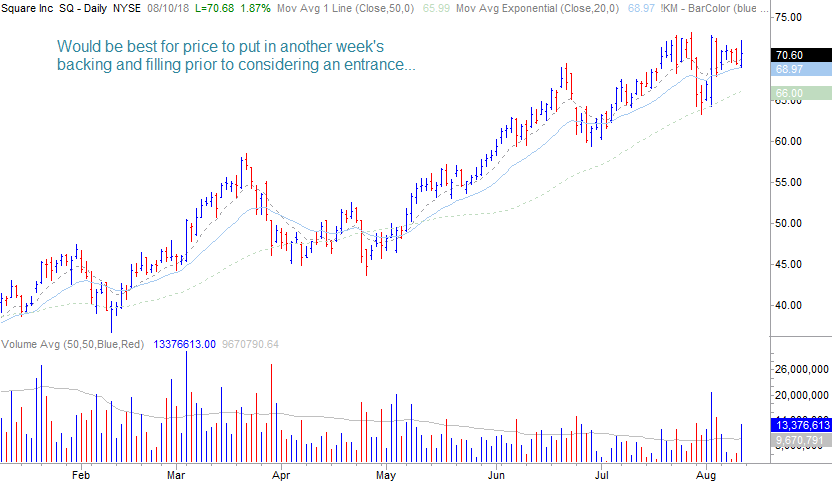 Staar Surgical (STAA) stock has lived up to its name, up from 10 to over 40 in the past year. A 99 RS stock in a 98 RS group that is under solid accumulation. Earnings are expected to go from 1 cent a share in ’17 to 3 cents this year and 26 cents next. Revenue has expanded 55% in the recent quarter.

Price is extended after its recent earnings-related move up. This should be watched for at least another week of sideways action before entry can be contemplated. 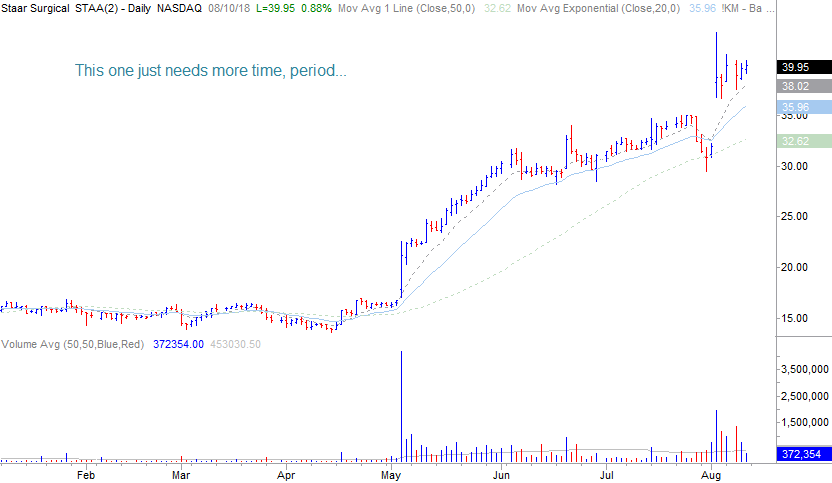 Tabula Rasa Healthcare (TRHC) is tracking to grow earnings by 148%/43% in ‘18/’19. Estimates were raised in the wake of last week’s earnings report. Revenue has swelled 65% in the latest quarter. A 99 RS stock in a 94 RS group that is under extreme accumulation over the medium-term.

Price forms a five-week consolidation. The stock can be taken above the base top of 70.15, the 7/6 high. 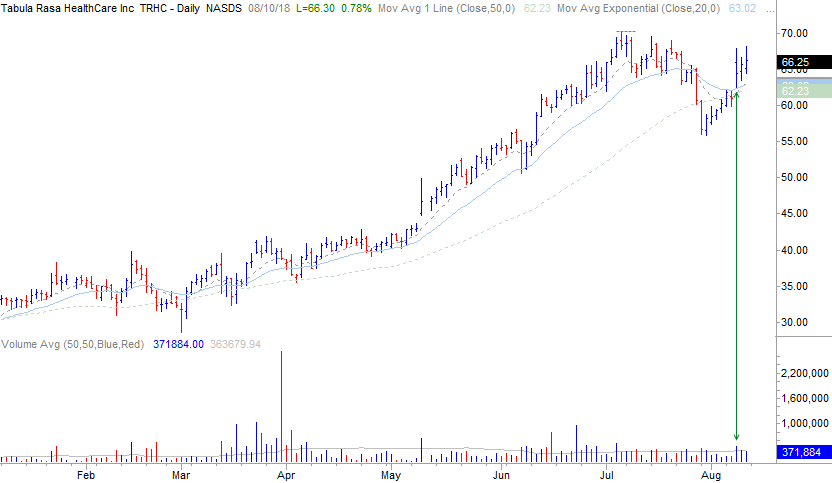 In sum, in the wake of a generally well-received second-quarter earnings season, and with breadth and leadership in good shape, the averages hold their own. Volume remains the soft spot, perhaps due to uncertainty related to trade tariffs. A good number of leading names stand less than 10% from their 52-week highs, but few are forming five-week-plus bases. This fact, the soft NYSE volume, and the presence of an often-soft period immediately ahead, augur for a modicum of caution.

For intraday ideas and analysis: https://twitter.com/mardermarket